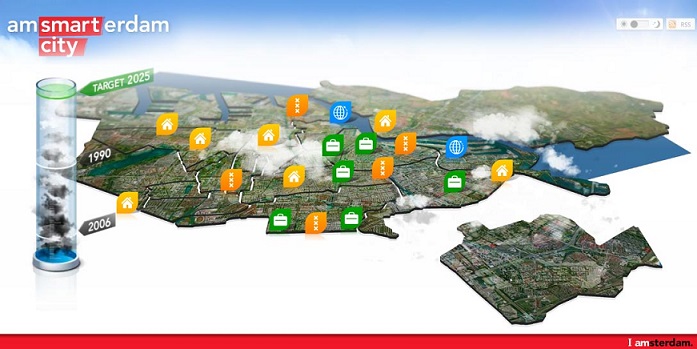 Amsterdam Smart City is an ongoing effort lead by Liander, regional grid operator and Amsterdam Innovation Motor (AIM); within a two-year period, fifteen projects will be implemented in the sustainable focus areas: Working, Living, Mobility and Public Space. Many companies such as IBM, Accenture and CISCO are involved in this project or other related ones. For example Cisco will develop the network to connect household appliances to an energy management system; IBM will create the network inside the home, including connecting the home network to the web; Accenture will manage the integration of smart grid technology such as smart meters, oversee the analysis and use of data gleaned from the smart grid buildout, and support other carbon-reducing projects, and Dutch utility Nuon will develop the applications for the energy management system.

Amsterdam Smart City is also partly financed by the European Fund for regional development of the European Commission. For Example Amsterdam has more than 500 km of cycle tracks and lanes, plus 900 km of bicycle friendly roads (60% of the total amount) with speed ramps and a maximum speed of 30 km/h. Amsterdam as a whole city has 740 car sharing spots (200 in the center). 90% of all housing in Amsterdam is within 400 m of a car sharing spot and in the center 80% has a car sharing spot within less than 100 m. The ultimate goal of Amsterdam Smart City is to reduce CO2 emissions by 40 percent by 2025, a feat that would place it ahead of many other cities in the Netherlands and Europe and, perhaps, attract an increasingly sustainability-minded population.

Several best practices are documented: deploying smart grids, testing smart meters and “smart” energy applications with customers on site is a main area of activity for cities. For instance:

Amsterdam is also member of the Connected Urban Development (CUD) cities with San Francisco, Amsterdam, Seoul, Birmingham, Hamburg, Lisbon, and Madrid. It’s a leading initiative with CISCO that aims to demonstrate how to leverage ICT, above all high connectivity and collaboration, in order to reduce carbon emissions, delivering innovative, sustainable models for urban planning and economic development.

Our work puts a strong focus on the role of data that tracks progress and guides #SmartCities in becoming inclusive. We are happy to see our contribution in the report on Inclusive Smart Cities by @DeloitteUS - http://bit.ly/3c25eW8

What are smart cities? Cities centered around people! Learn more about them here! https://www.archdaily.com/934186/designing-smart-cities-a-human-centered-approach